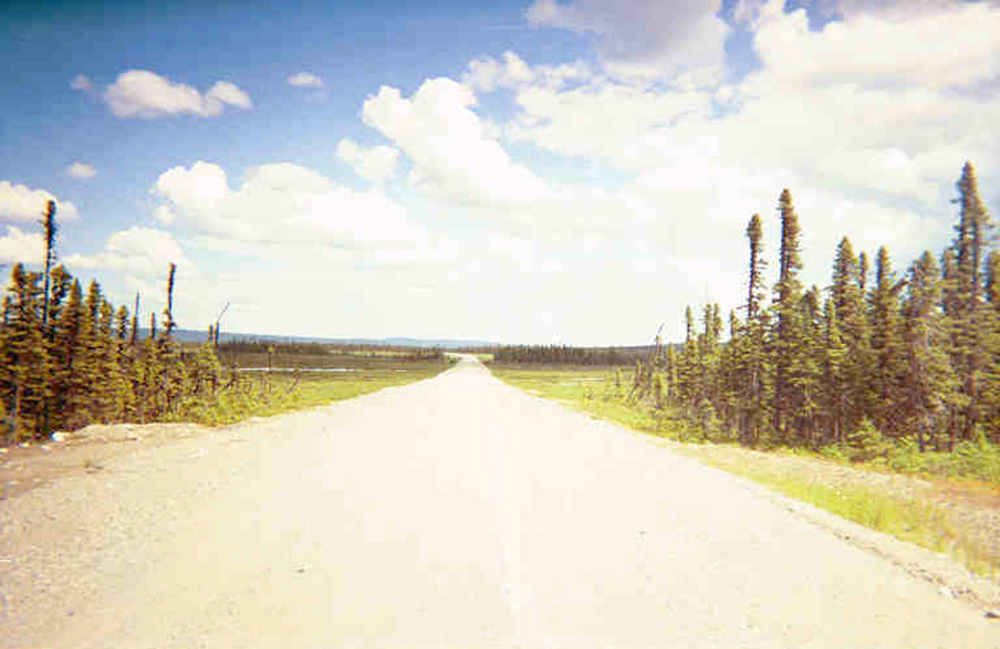 The weather is beautiful, sunny and warm.

The Trans Labrador Highway is straight and flat with no potholes or washboard, but the gravel is coarse and loose and accumulates in drifts and ridges. If I can stay in a path which is packed and hard I can go pretty quickly, but if I wander into the loose sand my front wheel suddenly kicks out in a new direction. Sometimes the track I’m following is just a rut the width of a single wheel and sometimes it’s not even on the right side of the road; there is not much traffic coming the other way, a truck or two every hour, but when it comes it comes fast. After hours of this micro-navigation, of shifting back and forth between tracks and watching for sharp rocks and loose gravel banks, I no longer see the textures of the road but just the colors that represent them — I know the road’s palette, it’s become a painting and I thread my way among its hues. I learn the rules of a strange color game: to get to the end I must follow the silver road-within-the-road, I must cleave to the golden band or the cream bar.

I stop often in an effort to stay alert but when I do flies the size of quarters rise up and start circling. They are the most evil-looking flies I’ve ever seen, huge, black and chitinous as flying crustaceans with abdomens like grapes full of pus. They don’t bumble and wobble idiotically like flies should; no, they circle with the slow deliberate motions of other large predators — they are confident. If I am bitten by something that large I will die on the spot of a heart attack. I can’t stop for more than a minute before riding off in terror.

Every time I stop I hear the same bird. The low, dark trees are the same. The road is the same. The same evil flies rise up. This is not a diverse ecology. And every time I stop there’s a spent shotgun shell lying somewhere within sight. If my random sampling is representative then that would mean there’s a shotgun shell about every 30 feet. Assuming an even distribution along both sides of the road for its full 300 miles, that’s a lot of shotgun shells. Presumably they are the only thing effective against the flies.

After six long hours I reach Churchill Falls, almost halfway. I’d planned to stop and rest, have some lunch; instead I take five minutes to get gas, an Aero bar and a cup of coffee, then get back on the bike to do it again.

Churchill Falls isn’t actually a dam. Because there is a thousand foot natural drop here they didn’t have to build a dam, just divert the river through a set of underground turbines. It’s because of this that they came all the way out here to build it; I’m told that Churchill Falls supplies the power for New York City. They built a railroad from here to Goose Bay just to bring in the hydroelectric equipment, then the leftover railroad bed became the road.

In the afternoon I go fast, deleriously fast, faster than I’d thought possible. I can’t tell how fast without a speedometer, but it feels unreal, dreamlike. I float over the gravel. Partly it’s because the road is better, surely, but there must be something else — I feel like I’m developing a sixth sense, a Dirt Sense, because I’ve started making critical decisions unconsciously, just like in normal riding. I realize I’ve slowed down and then notice that the gravel’s become deep and loose; I see the trees whipping by and conclude that this stretch of road is firm and good.

Just before dark I roll into the city of Happy Valley-Goose Bay having completed in 11 hours what takes people around here only five. The paved streets are smooth as eggshell.