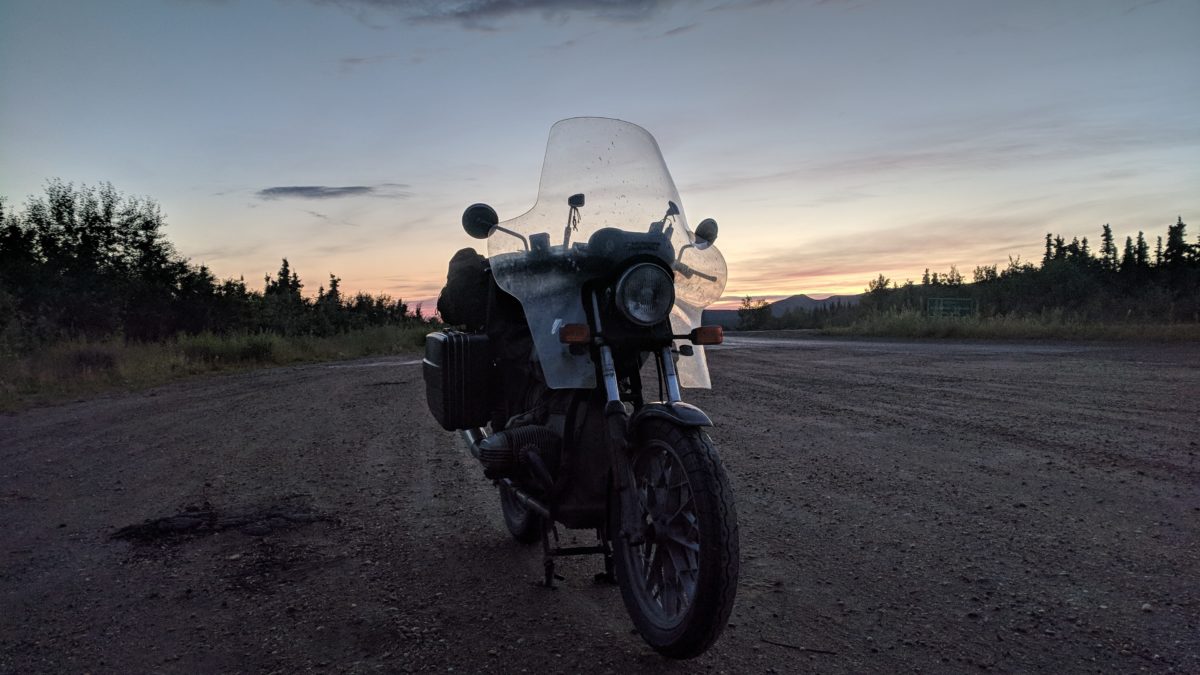 I stop to stretch my legs and use the restroom in Houston, north of Anchorage, but someone has left a turd in the bowl so colossal that it won’t flush. Two inches in diameter and 8 or 10 inches long, it is perfectly rigid — when I flush, the water just cascades around it and it hangs there across the bowl in mid-air, an unflinching bridge to nowhere. I flush twice and it doesn’t budge. Someone’s going to have to come in here with a shovel and break it up.

What was it like to pass that? Was it agony, or ecstasy, or both? Did they have to stand up to get it all the way out? Were they embarrassed by what they had done, or terrified, or proud? Or was this routine for them?

I give up and decide to wait until the next rest stop. I can’t imagine squatting over that thing. It needs its own space. I had started by assuming it had been left by the previous occupant, but really, who knows how long it’s been there, defending its territory? Maybe that toilet is just where it lives now.

An enormous brown bear with two cubs lopes across the road in front of me, an order of magnitude larger than the black bears I’m used to. A brown bear and a grizzly bear are genetically indistinguishable, the difference seeming to be a matter of location, hunger, and opinion. In Alaska, the terms are used interchangeably. There are about 1000 grizzly bears in the lower 48 states; there are 30,000 in Alaska.

Periodically, moose slip off into the woods, huge shadowy refugees from the Pliocene. Rabbits are so numerous they practically line the road — at one point I see four at once.

Mount Denali takes a moment to process. I stop at a turn-out and gaze numbly at a huge, wicked-looking peak and think that must be it. But above that peak are clouds, and then above those clouds is a great white shape, something mythic and unreal. That’s Denali, 20,000 feet in the sky.

The cork covering the timing window has fallen out, so I fit another. Further down the road, I notice gas leaking down the fuel line over the secondary filter; thinking the fuel line might have become stretched where it attaches to the filter, I put on a clamp, but it doesn’t help. It turns out that the little plastic filter itself has cracked. Remarkably, I have a replacement. Someone gave it to me once because they had extras.

I’m trying to understand the circles of Earth.

I’ve always taken it for granted that the sun rises in the east, sets in the west and the rest of the time is generally in the south; take the time of day and the position of the sun and you can get a good estimation of the compass directions.

Now much of the time, the sun is in the north, and shadows fall to the south, or wherever. The sun rises and sets just to either side of north. The rest of the day, rather than make an arch overhead from horizon to horizon, it just makes a great slow circle in the sky, a tilted halo where briefly one end dips beneath the ground.

When did that change? At some point when I was riding up here, the sun moved into the north and directions stopped working, and I didn’t even notice. I wasn’t paying attention.

The equator is equidistant between the poles. The Tropic of Cancer is the northernmost latitude at which the sun is directly overhead at the summer solstice — the significance of this one is lost on me. The Arctic Circle, though,  is defined as the southernmost latitude at which the midnight sun still shines on the summer solstice, the southernmost circle where there is at least one day a year when the sun never goes down.

I’d love to see the midnight sun, but the solstice was a month ago so it has been leaping northward since then. Additionally, the Dalton Highway to Deadhorse, the Haul Road, is closed for the next four days according to the blinking sign, and that’s the only road. The midnight sun is out of my reach.

But I want to get as close as possible. By riding from Anchorage to Fairbanks, I’ve gained almost an hour and forty-five minutes of daylight. Because of human oddities like time zones and daylight saving time, sunset is at 11:45 pm and sunrise is at about 4 am, which means true midnight should be around 2 am, right between the two.

I reach Fairbanks at midnight, have breakfast and keep riding north. There’s a bright pink sunset in the north which is also the sunrise, and even though it has been raining and there are some clouds, it never gets dark enough that I can see my headlight on the road. A little after 2 am the clouds lift and the sky turns blue. I turn around and head south again, the sun rising at my back.

Around midmorning, as I start to fall asleep on the road south of Fairbanks, I realize that this hasn’t been my best plan. I remember that this is exactly what I swore I wouldn’t do, ride when exhausted; somehow the imp of the perverse managed to pitch the plan to me in such a way that I forgot about getting tired. I pull a bug net over my head and pass out by the side of the road for two hours.

The day continues. I see another black bear, and more moose. Huge black beetles with long wavy antennae are falling out of the sky like ash, but they seem harmless enough. A helpful Alaskan explains that they actually have enormous jaws and a terrible bite, which would sound like a put-on except he convincing runs back inside.

I’d hoped to spend the night in Chicken, the last town in Alaska on the way to Dawson City, but it turns out not to be a town but just a loose assemblage of take-your-money buildings. Wearily, I begin ascending the Top of the World Highway and cross back into Canada.