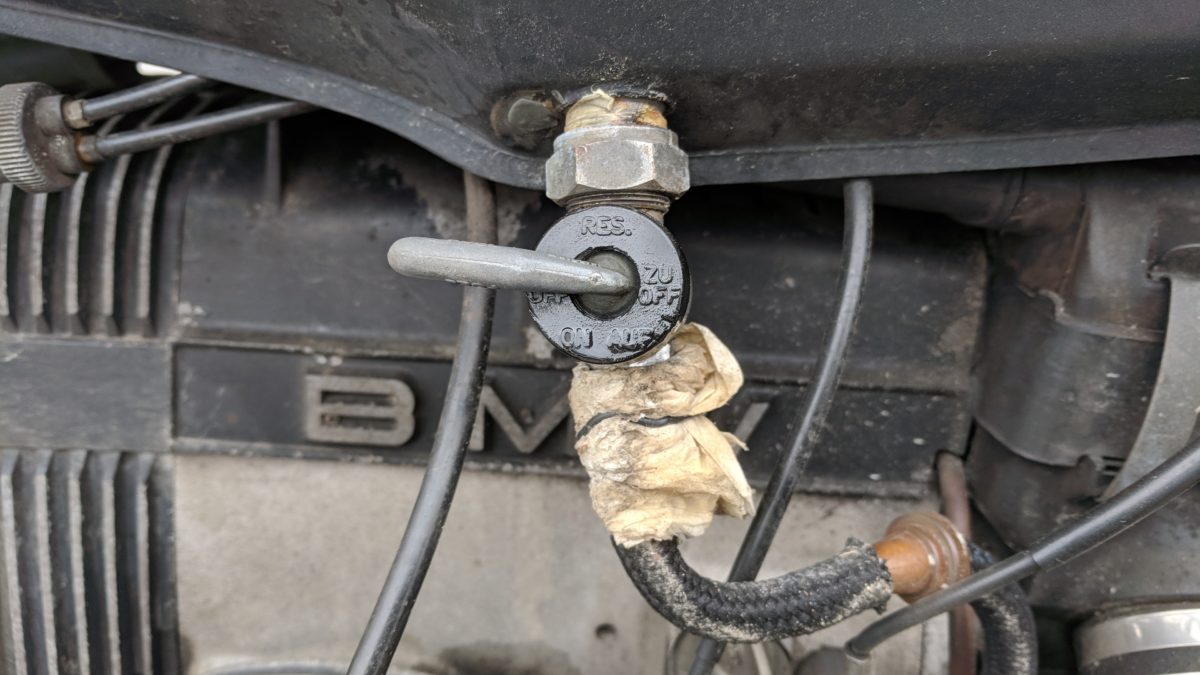 I left two days late and late in the day, with one bag too many. I threw it on my back and went, and it pressed down on me like a giant’s hand slowly crushing my spine.

I ran out of time, and there’s a lot still undone. This will have to happen along the same operating model as old sailing ships, where the crew fixes and renews as they go, replacing planks, sewing sails and forging parts at sea.

Three hours of repacking the next morning got the bag off my back, but remarkably the bike was out of gas. I had switched to reserve when I coasted in to the cabin, and that should have left me another 15 or 20 miles of range; instead, I’m stalled out after 300 feet in the pouring rain. Apparently that slow leak in my petcock wasn’t so slow.

The nearest gas station was about 15 miles away, which isn’t that far until you don’t have gas. Soaking wet, I dully contemplated this potential day-breaker. Then I realized there was boat-gas in the pump house for the two-stroke outboard motor — how bad could that be? After sloshing it all over my newly painted gas tank, the bike roared back to life and I was off. Hopefully 15 miles of gas-and-oil mixture would’t be enough to foul the plugs.

On the plus side, the fairing is a revelation. It rains all day, the logical consequence of naming a bike “Stormbreaker,” but with the fairing on I barely care. I’ve never been able to beat rain, but now, as I barrel up the highway, I finally understand the trick. Get a goddamn fairing. The raindrops skitter across my visor with all the impact of an outdated screensaver. I’m not even wearing gloves.

In Essex Junction, Vermont I buy a new petcock, shiny and bright, for forty dollars. It works perfectly, silky smooth, flawless and beautiful. 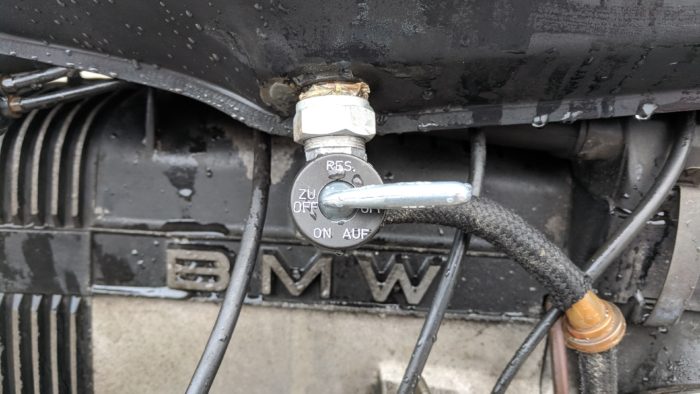 On the morning of the third day,  my battery is dead. This is demoralizing; an afternoon on the highway should have left it well charged. The paperback-sized jumpstarting device works brilliantly, and I use it to limp 10 miles to the nearest expert. By the time I get there, the battery is again holding a bit of charge, so that’s encouraging — the bike is charging.

I ask about new batteries, and I ask for advice. He runs a test on the battery, and the device spits out a printout saying that the battery is good.  He explains to me that I probably left the headlight on overnight. This seems really unlikely, and it doesn’t fit the symptoms (the battery had enough power to at least try to turn over), but he patiently explains to me that he’s seen it happen 10,000 times; it is clear by “10,000 times” he really means “10,000 idiots,’ but is just polite enough to be careful with his phrasing. He also tells me that he knows the bike is charging, since the generator light goes off. He talks me out of buying a battery, or taking any action at all.

While it would be embarrassing to have left the headlight on, I want to believe it — that would mean problem solved. Unfortunately, the battery is almost dead again by the time I reach the Canadian border, and it just barely lurches to life in front of the border guard. Shortly after that the battery goes down for good, and I spend the rest of the day jump starting the bike with the device, and keeping the tachometer above 2000 so it doesn’t stall out. This becomes harrowing in the inevitable stop-and-go traffic around Montreal, and both the bike and I are tested on how hot we can run.

A couple times on the highway, the bike lurches and bucks violently. I realize dully that this is happening when I use the turn signal. That’s how thin the thread of electrons is that I’m hanging from, that even a tiny blinking light could be disastrous.

I stop at a gas station somewhere west of Montreal to consider my options, and I hook up the trickle charger since, why not — it takes days to charge a dead battery with this, but there’s no harm in hooking it up.  I am hot, tired and discouraged. Nigel comes around the corner to tell me that’s a fine old R bike I have there, and this is nothing, this is what makes it fun.  Figuring things out is what makes it an adventure. And this, a battery that won’t charge, this is nothing! He tells me a story about pulling bolts out of his transmission in order to keep his exhaust attached to his bike so he could get to Washington at 3 in the morning. He’d gladly ride to BC in my situation if he just had a good battery charger. “Get a faster charger, and you’ll be laughing!”

Nigel is reciting so closely from my own script that it’s unnerving. Am I imagining him? We talk through my problem for half an hour, unless this is just some sort of Mr. Robot scenario.

I want to be laughing, but the PTSD is kicking in. I rode all the way back from California with a dead starter once, but it only makes a good story with the benefit of time passed. On another bike, I rode up around New Brunswick with my girlfriend at the time and often had to jump start the bike — I thought I was scoring points for being self-reliant, but later realized she’d been deeply horrified by the whole experience. There is something in me that batteries hate, and I don’t want to do this again.

It’s a puzzle because the battery tested as good, and the bike seems to be charging — except, somehow that’s not working out. We agree, though, that a fast battery charger is a solid play. Nigel tells me there’s a Canadian Tire in Casselman, just two exits up, go right and you can’t miss it. Perfect.

The battery decides to get a room in Vars and have a charging party.

The charger claims to be intelligent, and has 2, 4 and 6 amp modes. Upon being hooked up, though, it goes straight into “charged/maintaining” mode, which is no good. It’s not charging because it thinks the battery is full.

I finally pull the battery out and see that the electrolyte is half gone.

Had I really not checked it before I left? That’s humbling — I thought I had, I’d been moving the battery back and forth between the two bikes, but who knows.

Cause, or symptom? I carefully top it up with bottled water that claims to contain no minerals.

I remind myself that since the plan was to work things out as I went, then everything is going perfectly. 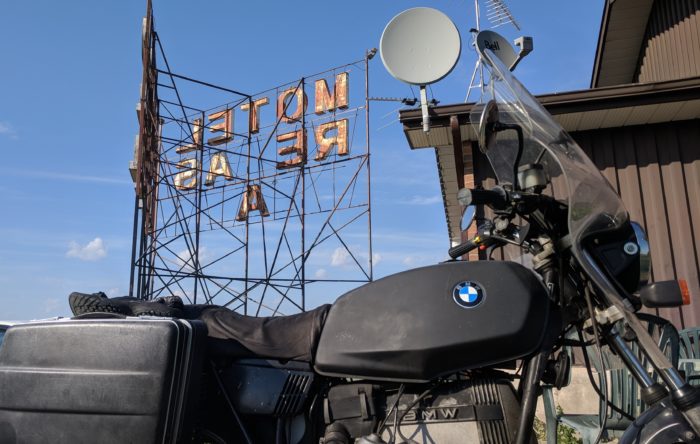