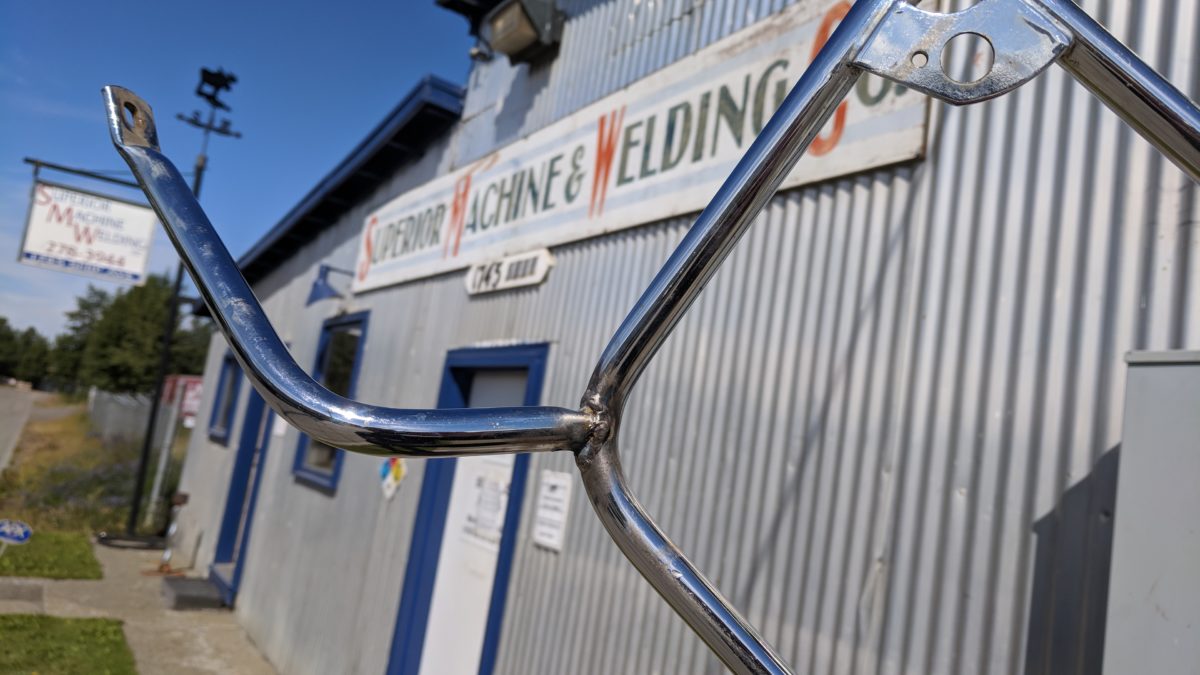 I had a long and detailed list of projects to accomplish once I had a base of operations in Anchorage, but in the end made progress on only a few. Being surrounded by people has a muddling effect.

My left saddlebag was sagging, and I thought it needed bracing. In fact, the bracket was cracked right through and barely hanging on. There was nothing to do but get it welded, and Jake at Superior Machine and Welding took care of it in no time at all. What had at first seemed like a daunting problem was resolved in minutes by someone with the right knowledge and tools.

I also needed a new back tire, as the old one was too worn down to face the long trip home, and some of the roads ahead. That problem would not be rushed, though, since no one in Anchorage or Fairbanks had the right size in stock, and ordering a new one would take eight days.

There was nothing to do but wait.

I set about rearranging the weight on the bike again, to bring more of it out of the saddlebags and onto the seat. I had been proud to use the original Krauser bags, but now I feel as though I have been needlessly torturing some lovely museum pieces. Because they have such a large capacity, it’s easy to overload them. Also, seeing thousands of miles of impeccably-outfitted adventure bikes has left me feeling under-geared.

Anchorage has a frenetic energy, fueled by myriad parking-lot coffee shacks and Red Bull smoothies. It makes sense in a place where you can’t count on day and night to mediate your sleep cycle that you have to do it manually. A month after the solstice, the sun still doesn’t set until 11 pm.

The pull-tab shops puzzle me for a  while, but then it’s explained that they are essentially scratch-ticket type gambling; the Alaska gambling laws cause them to be sold only in special, dedicated stores. The bulk of American cultural differences between states can be explained just by the variations in their liquor and gambling laws.

The tire arrives at noon on a Thursday. While I’m wrestling the wheel back on in the parking lot, an older man who turns out to be the owner stops on the way to his truck and says they haven’t seen an R65 up here in 20 years, though they used to sell a lot of them (the shop has been around since 1972). I take this with a grain of salt, since I don’t think he’s handling the day-to-day details any more, but still, he said it, and I wonder what it means.

It’s 2:30 in the afternoon by the time I can get going, a late start. I have a weekend pass to the music festival in Dawson City, 500 miles away, and the route I want to take is even longer than that. But I think I can make up some lost time with a little luck, decent weather, and the full weight and power of astronomy.