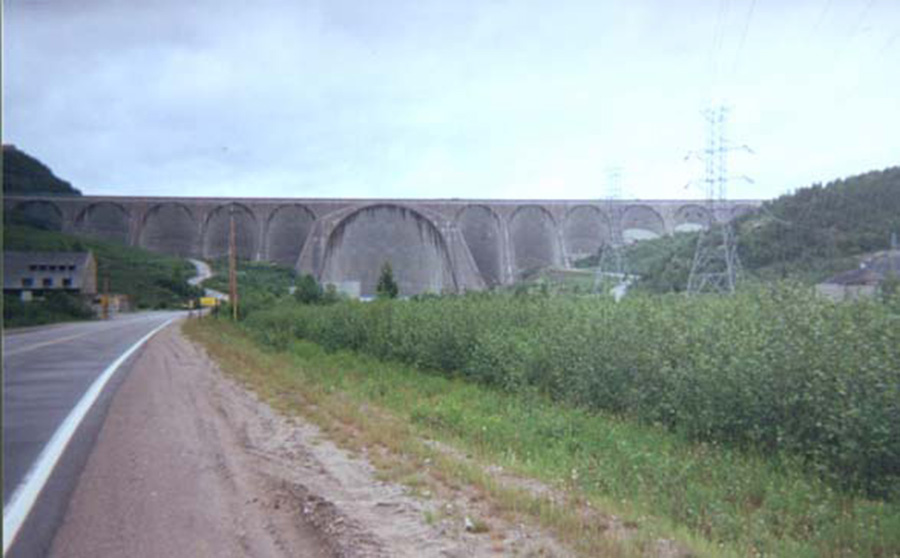 It was cool yesterday and I didn’t get started until noon, but it was still a nice ride up through the middle of the White Mountains, then over the gentler farmland of northern Vermont and finally onto the plains of Quebec with their squat sheetmetal buildings. I made it to just north of Quebec City for the night, then rode up the northern shore of the St. Lawrence this morning. The sun burst into silver flame on the water.

At one point the road stopped and at the end of it there was a boat. I pulled over and looked at my map; no, I hadn’t taken any wrong turns. I followed the cars onto the boat and in about five minutes we all drove off again on the other side of an inlet, where the road continued.

At noon I reached Baie Comeau where 389 heads inland. It’s an unremarkable medium-sized sideroad with nothing to mark it as the beginning of the only overland route to Goose Bay, 600 miles away. If you buy a Rand McNally or National Geographic road atlas of North America and look at the map of Canada you can see the road to Goose Bay, the only road that penetrates the interior of Labrador, the only road to Labrador at all. It forms a great big arc from the St. Lawrence to the Labrador Sea, going first north through Quebec and then east across Labrador. Much of it is marked by a dotted line: unpaved. Flip to the map of Quebec for more detail and you’ll discover that it only covers the southern part of the province, and the same happens if you buy a fold-out map of Quebec. In most atlases you won’t find a map of Labrador at all, even though it’s about the size of Oregon. I realize it’s just an economic decision made by the mapmakers- why double the size of your map just to show one road (two if you count the road to James Bay)? — but the effect is eerie, as though the provinces are somehow reluctant to claim the region. The best the Canadian information center at the border could give me was a photocopy of a typed page describing the road conditions broken down into segments; the first segment is from Baie Comeau to a place called Manic 5.

For the 125 miles to Manic 5 the road heaves violently up and down and side to side, just a thin ribbon of tar pasted to the cortex-like contours of the Canadian Shield. At 57 miles north of Baie Comeau my speedometer cable snaps, taking with it my odometer and my best way to judge when I need gas. Then again, from here on out the gas stations are about a tank apart anyway so I’ll just gas up whenever I see one. It’ll be a while before I can get a replacement cable.

It starts to rain and I get cold and discouraged very fast; would a full day of sunlight have been so much to ask? I’d packed in a hurry and nothing was sealed in plastic so I have to repack everything in the darkening rain. There’s no place to stop before Manic 5, nothing at all along the road except a few empty hunting cabins, no way to mark distance so I don’t know how fast I’m going or how far I’ve gone, I don’t know anything except trees and rain.

It turns out that Manic 5 is short for Manicougan 5, the name of the hydroelectric dam. It’s just a gas station and cafeteria set within a semicircle of motel-like rooms, just an outpost of the empire. Soaked and shaking, I get a big hot order of poutine (french fries with cheese and gravy) and try to warm up. There are pictures of the dam hung on the walls; I have no love of dams, but the road wouldn’t be here without it.

I have a photocopy telling me that the next hundred miles of road are unpaved gravel. The more I think about it the more it seems like a statistical inevitability that at some point along that 100 miles of dirt road I will go down. No matter how careful I am, eventually I’ll make a mistake: soft sand, loose gravel, a pothole or a corner too fast — something will happen and I’ll go down. I can’t scrutinize every foot of road for 100 consecutive miles; I just don’t have the attention span.

The only strategy I can think of is to ride so slowly that when I do go down I can get back up again. It’s five p.m. and I’ve been riding since five in the morning. I think about getting a room, but the rain seems to stop so I continue north.