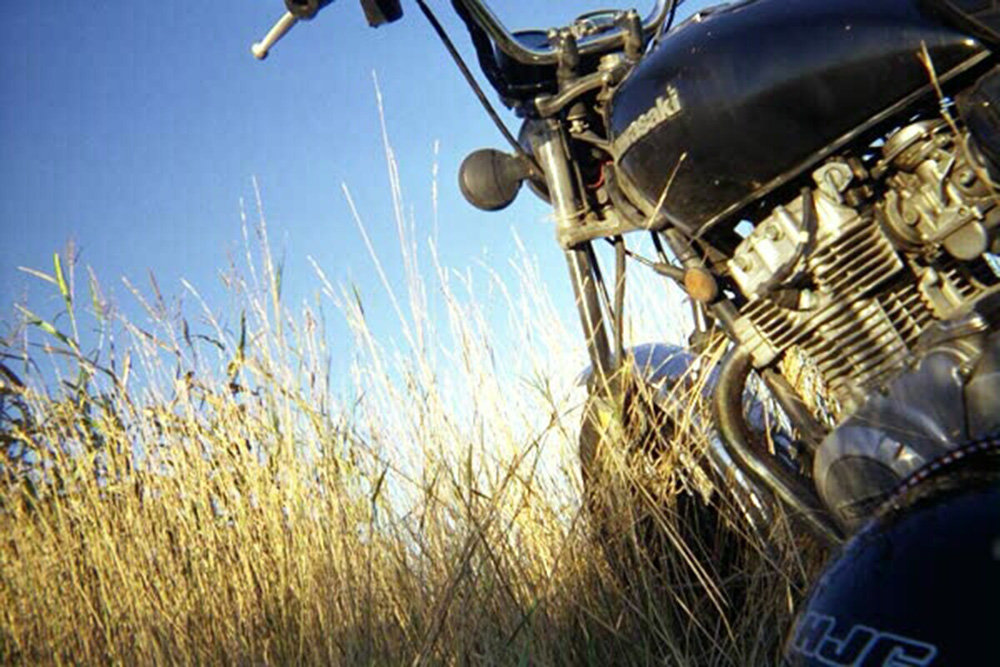 I hadn’t seen a Dunkin Donuts for many days and was afraid I’d passed out of their range, but this morning I found spoor. At the rest area just inside Wisconsin there was a trash can with two styrofoam Dunkin Donuts coffee cups right on top of the pile. My heart leaped up but I rode all day and still didn’t see an actual DD; the rest area was on I-90 so it’s possible the cups weren’t fresh and had been carried from many states away. I don’t know what to attribute their absence to- I can’t blame it on the Waffle Houses anymore since they don’t seem to fare well this far north, but maybe the Dairy Queens have predatory tendencies that I’m unaware of.

Riding across southern Wisconsin I saw black and white road signs proclaiming things like “XX,” “CH,” “G,” and “Q.” Apparently the county roads are given letters instead of numbers — it’s as good a system as any, I suppose, but I still felt like I was in a Sesame Street skit.

The butterflies have started to change, so I know I’m not at home anymore. A week ago I stopped in the southeast corner of Indiana to investigate a stream and I found an abandoned arched stone bridge and a posse of big black butterflies. They looked like floppy bats as they moseyed around the brown slab stone streambed, and had a faint blue irridescence that became bright on the back wings — pipevine swallowtails, which I’ve never seen in New Hampshire. Along many highways and roads since then I’ve also seen small bright orange-yellow butterflies that I can’t identify.

The leaves have also started to change, but when I saw the first brown and yellow leaves in Kentucky I didn’t believe it. It seemed too early so I thought it must have been some strange Kentucky tree with odd habits, but since then I’ve seen the leaves starting to change colors across five states; it must be the drought. Fall in New Hampshire is one of the most beautiful things on Earth; I’ve only missed a couple in my life and it breaks my heart to think I might miss another.

I’ve seen two sets of sundogs so far: parhelia, smudges of rainbow colored light about a foot to either side of the sun (measured at arm’s length). Both were in the late afternoon, once in Ontario and once in Indiana; as I understand it they’re pieces of a halo formed by sunlight passing through ice crystals. There are signs and portents everywhere, but not all of them are clear to me.

Giant dirt bears are real, and they sleep on the banks of the upper Mississippi.

Someone formed mounds of earth here on top of the bluffs. Some are domes 20 feet wide, some are like dashes 100 feet long; some are bears and birds. The Great Bear mound is 137 feet long and some of the birds have wingspans of 100 feet. The domes can be 2500 years old while the animals have probably slept for only a millenium or so.

They’re low, rising only a foot or two or four above the ground. A swell a foot high spanning 100 feet would be imperceptible to me if it wasn’t cleared and the grass around it cut, but once I know what to look for the giant bears are undeniable, massive and subtle. Discerning them in the overgrown woods must have been like learning to see Magic Eye images, staring until patterns rose up out of the leaves. The mounds’ sublety makes them even more wondrous, not only because it means they weren’t really meant for us ground-dwellers to see but because it makes me wonder what else I’ve missed. If this normal-looking ground is actually swollen with images and symbols, what about all the other ground I’ve walked across? If I’m blind to these Godzilla-sized animal crackers, how blind am I? There could be equations etched in the White Mountains, musical notation inscribed in the stream-patterns of marshes, the name of the one true God written and erased in the dunes every hour, and I would never know.

They’ve found traces of old fires set in the bears’ heads and hearts, as in mine. The bears must have nearly come alive. They speculate that the fires might have been used as parts of funeral rites. Is that what you have to do after you die — face down a giant dirt bear and pass though his fiery mind?

At the visitor center the filmstrip teaches me that this was a transitional region between the prairie to the west and the hardwood forest to the east. But there is no hardwood forest to the east- I know because I’ve just ridden from there, for many hundreds of miles, and there’s nothing but the Corn Plain. I enjoyed that ride through the sweet-smelling farmland, but this lends it a sinister cast. There was once a vast and mighty forest and we eradicated it, and now the corn we put in its place is all brown anyway.

The Marching Bear Group is a few miles south of the others and it’s getting dark by the time I reach them. There are ten bears marching in a line, head to tail, with a couple birds at the ends. The grass around the bears has been mowed while the grass on the bears grows wild. The bears seem to be marching out of Harper’s Ferry; the birds are flying to the river.

Although it’s against the rules, I sleep between the bears, high on the grassy hill under the oaks and maples. I dream nothing and leave no trace.