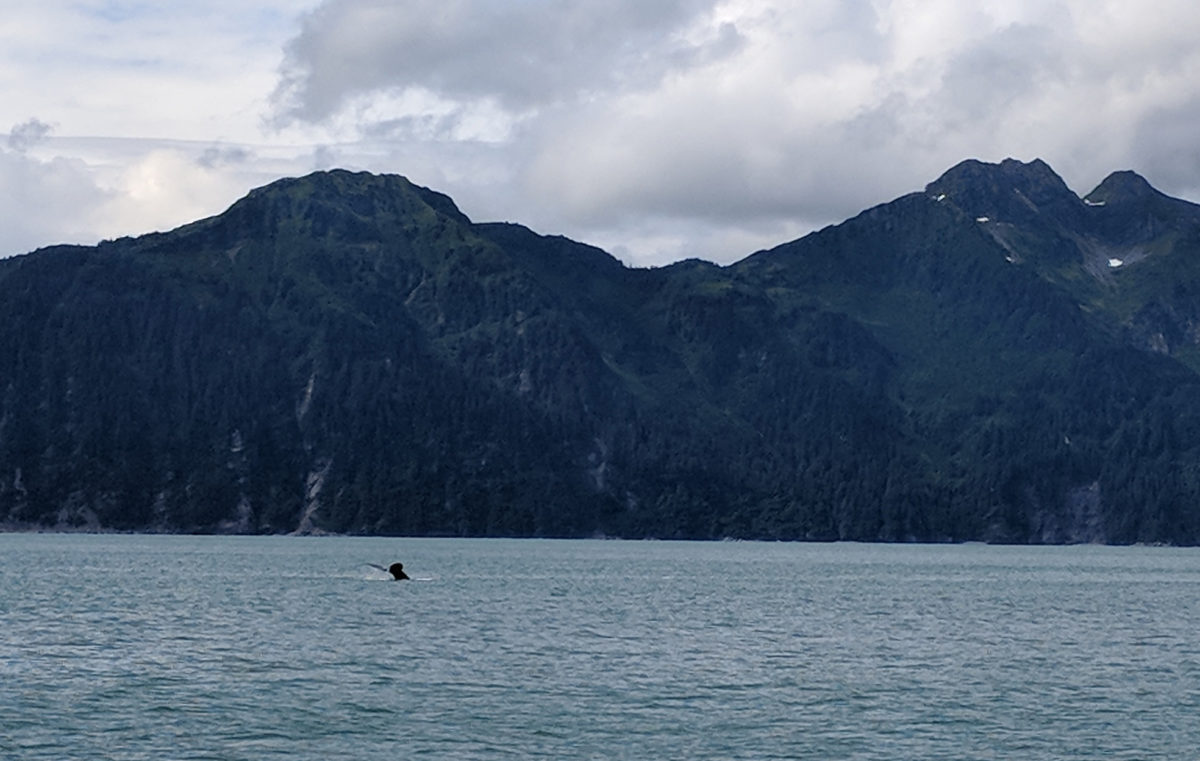 Despite arriving a day ahead of schedule, Cullen and Olivia were gracious enough to let me stay with them. After barely talking to anyone for two weeks, I was poor company at best. We went out for Korean BBQ and then ice cream by the water — it was pretty fantastic.

Once the rest of the family arrived, we relocated down to Girdwood on the Kenai Peninsula for the wedding.

The Kenai Peninsula is where the Chugach mountains spill into the sea. Wickedly folded shoulders of land tumble right to the water, frosted with glaciers and slathered in clouds. Much of it is considered a rain forest, and the clouds stay parked just a few thousand feet up.

Over Girdwood, the clouds were exactly 2000 feet up, and there was a trail that led right to them. At the top of the terrestrial range I was at eye level with the base of the celestial one as it sat like a cap over the valley.

On the way up the trail, I saw my first ptarmigan, a sort of arctic grouse. First I saw a pair, then a few hundred feet further on a mother blocked my way to give her chicks time to scamper. She hunkered down, spread her shoulders wide and hissed at me, then rumbled, then trilled and chirped to the chicks — she went through a whole array of vocalizations, impressive language skills for such a tiny dinosaur.

Against this backdrop, and with the great people involved, the wedding was a delight, and uninterrupted by moose like one wedding we heard about.

The next day we took a cruise out of Seward, surveying the steep-cut fjord that is Resurrection Bay as we arced toward the Gulf of Alaska. Fifteen-mile-long Bear Glacier touched the sea on one side, while smaller alpine glaciers hung above the whole coastline.

It was like a parade of charismatic megafauna. We saw a humpback whale snacking, a minke whale skulking about, Steller seal lions jostling on a rock, harbor seals lying inert like sausages, sea otters both rolling and tumbling and napping (which looked a lot like being dead), bald eagles here and there and then puffins to boot, both horned and tufted. If we’d just kept sailing, presumably we’d have seen all the famous animals of Earth lined up along the shore, elephants and zebras and ostriches just waiting to pose for us.

We stalked the humpback for a while, which was between us and the land. It looked like it was five feet from the shore, picking its way casually along what was presumably a steep drop-off. Eventually it found a cove full of birds which must also have been full of food, because there it lingered, turning, surfacing and doing whale things.

Here and there along the shore of the peninsula there are small stands of grey, dead tree trunks, ghost forests. They are remnants of the 1964 Alaska earthquake, magnitude 9.2, the largest earthquake ever measured in North America. In some places, it caused the ground to drop 8 feet; patches of coastal forest sunk into the sea and died. It also caused a tsunami which was more than 100 feet high as it came into Seward, but since the bay has three large barrier islands, the surge was broken down to about 30 feet; a lesser disaster.