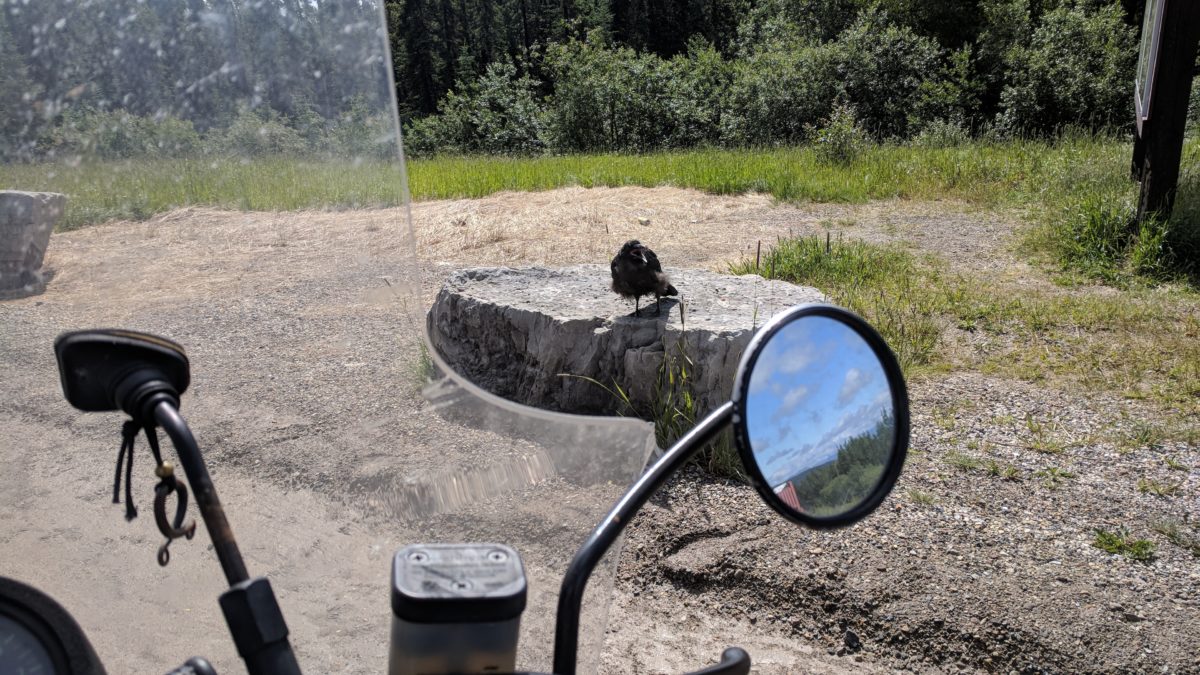 The first leg of the Alaska Highway is rough, dusty and barren. I cross a long metal-grate bridge high over a river, wobbling in the wind and imagining the effect if I stumbled. Facing a gap between gas stations, I fuel up at one of the card-lock systems, a giant automated pod with diesel at one end and regular at the other.

I’m in a grim mood. Though it has been a great ride, I wanted it to be more than that. Mostly, though, I have brought myself with me, and I can ruin almost anything. I am a black meteorite of bitterness hurtling across the landscape, pulled down from the Oort cloud to be judgy about everything.

At Stone Mountain, the trees fall away and great grey rock faces leap upward. I stop and Raven has words for me. He hops over and jumps up on a rock, then yells at me for five minutes straight. He does not sound pleased.

But I can’t quite get what he is saying. Eventually he gives up on me, snags a wormy bug from near my tire, and flies away.

Mountains scrape the sky above while tiny rivers wriggle through the valleys far below; it’s the whole package, in one vertical panorama. The water is gloriously clear, a rippling liquid lens for viewing rocks, but with a crazy blue-green gemtone tint.

The more water, the more the color deepens. Summit Lake has a supernatural hue, like a lake in a Japanese video game. I stop again and prance along the shore’s edge taking pictures of flowers like an elf.

I am riding down off a mountain for several miles, and the river beside the road is running the other direction, behind me. If I’m going downhill, then the river must be going up. I can’t make sense of it. Maybe that’s how things work here, with a bit of magic.

A while in the mountains can be disorienting, though, and at one point I find myself using a lot of throttle to go down a slope, only to dimly realize that I’m not. I’ve just briefly lost track of which way is up. 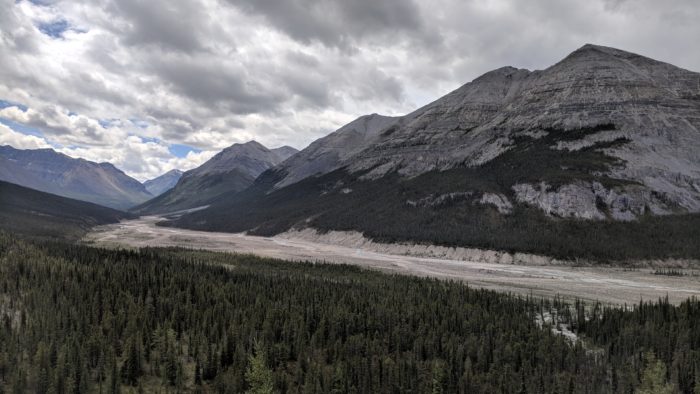 The road is riddled with devil goats. At one point, a mother and two kids are in the road, water on one side and a sheer, 90-degree rock face on the other. There is nowhere for them to go. I stop the bike, not wanting to chase them into the lake; they dawdle for a bit, and then go 10 feet straight up the rock and hang there in the air, watching me. I can’t see what they are standing on; it’s as if they are levitating. Magic goats.

A bison comes out of the woods. He rolls around, urinates, eats some grass. I spend ten minutes trying to get a good picture in case I never see another one, then around the next corner is a herd of 30, mothers and calves grazing along both sides of the road as if it’s theirs.

They’re wood bison, distinct from the plains bison of the U.S., but alike in that they, too, were almost hunted to extinction, until a herd of 200 was discovered in Alberta in 1957. They’re doing better now, but not by much in the grand scheme of things; they are a long way from the days when their name meant “multitude” and their kind spanned the continent, shaping the land and cutting the paths that would one day become the roads of men.

I stop at Liard Hot Springs, and it is spectacular. I almost didn’t stop, it seemed like such an indulgence but then there I am, paddling around in 100-degree hot tub water coming right out of the ground. The vegetation is weird, lush and exotic near the spring, and it feels otherworldly. I have been riding for days and days and now I am floating in a glen amid the gentle smell of minerals, surrounded by smiling people and rare snails and I want to laugh. I am all happiness, complete bliss, no future needed or past required. More magic water.

They admit that they don’t entirely know how the hot water is made. I’ve heard that about Yellowstone, too. It’s a reminder that, taken as a whole, what we don’t know may yet outweigh what we do, and that just might be a reason for hope.

I float down out of the mountains, coasting most of the way. Stormbreaker purrs.