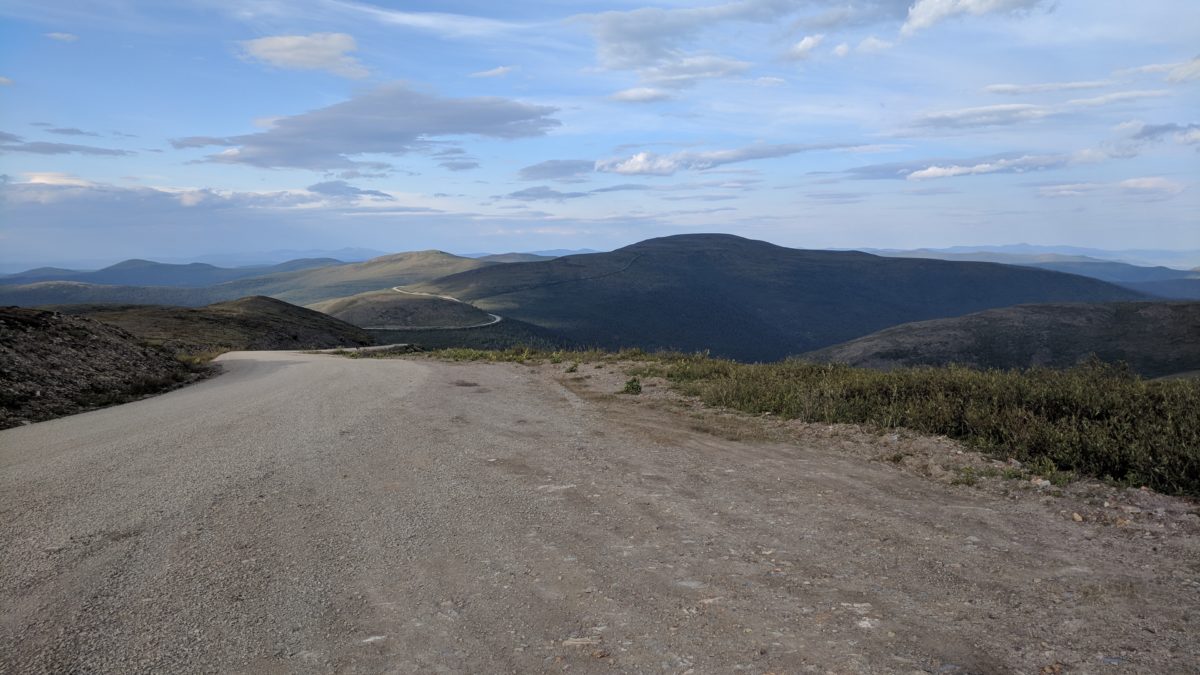 The Top of the World Highway is about 100 miles of road connecting Chicken, Alaska and Dawson City, Yukon Territory. It’s one of only two roads going in and out of Alaska, the other being the Alaska Highway, but since you eventually have to connect back to the Alaska Highway at either end, it seems more like one.

There was no road to Alaska before World War II, but after the bombing of Pearl Harbor the U.S. quickly re-examined its Pacific properties and concluded that the then-Territory of Alaska need overland access.

The Top of the World Highway, as far as I can tell, just gets Dawson City in on the fun, as it’s a whole lot shorter than going a few hundred miles down to Whitehorse and then driving 300 miles back up again. It runs along the crest of the highlands at between 3000-4000 feet for most of its length, and the views are spectacular.

The short section on the American side is full of potholes, washboard, wash-outs and big loose rocks, followed by a couple miles right at the border that are paved into a perfect ribbon of tar. The Canadian section of the road is much longer and entirely dirt, but it’s an exemplar of a dirt highway, broad, smooth and reliably hard-packed the whole length, so good that you almost forget you’re on dirt. It’s the same road, just managed by two different governments, and it’s hard not to feel that the difference is meaningful.

As I near the Canadian border, a dark shape looms along the side of the road, a caribou, antlers and all, dark-furred and large and briefly startled toward the road. I start to slow and it re-evaluates and loops back into the brush.

The border guard says the valley is full of caribou tonight, and a little further along I see a whole string of 6 or 8 come up a steep slope and cross the road, then continue up the other side. I look up to see them go, and they are briefly profiled against the sky before disappearing back into it.

At this latitude, the height of the road vaults the whole habitat north into the the arctic, an open, rolling tundra, a sky-world, a caribou-world. The shadows are long and I have barely slept, and the caribou feel like emissaries from a dream realm.

I make camp just short of Dawson City, and a big mountain porcupine comes out near the head of my tent to grumble at me. Except, I am so tired that the next morning I am not really sure if that happened.

A ferry brings me across the Yukon River into Dawson City at about 7 am.

Dawson City has dirt streets and wooden sidewalks, and it’s hard to figure out. On the one hand, it’s clearly some kind of tourist town, with every single sign hand-painted in the same old-timey style; on the other hand, it really is up here at the edge of everything, with only one paved road coming in and the nearest city 300 miles away, so there’s something real going on.

I decide it must be a bit like Portsmouth. Without tourism, our economy would tank, but the touristy veneer isn’t what makes the town interesting; it’s the genuine energy underneath.

I meet some loud people down by the river who offer to share their booze with me. They have an impressive selection, which they spread out on the grass — full bottles of vodka, rum and something else. I’m looking for a plan, but it’s only 10 am so I don’t think this is it, and I decline. I feel honored by the gesture, though — what could be more truly in the spirit of the old west than innappropriate public drunkenness with lawless people?

I wander through the town, tinker with the bike (the Top of the World Highway has made a new break in one of the fairing’s mount points), and in the evening I go to a few sets at the Dawson City Music Festival, now in its 40th year. The music is great and the crowd is vibrant and hip and diverse, and it all boggles the mind a bit — where did all these people come from?

I camp out at Dome Overlook above the city, and watch the sun set over Dawson and the Yukon.