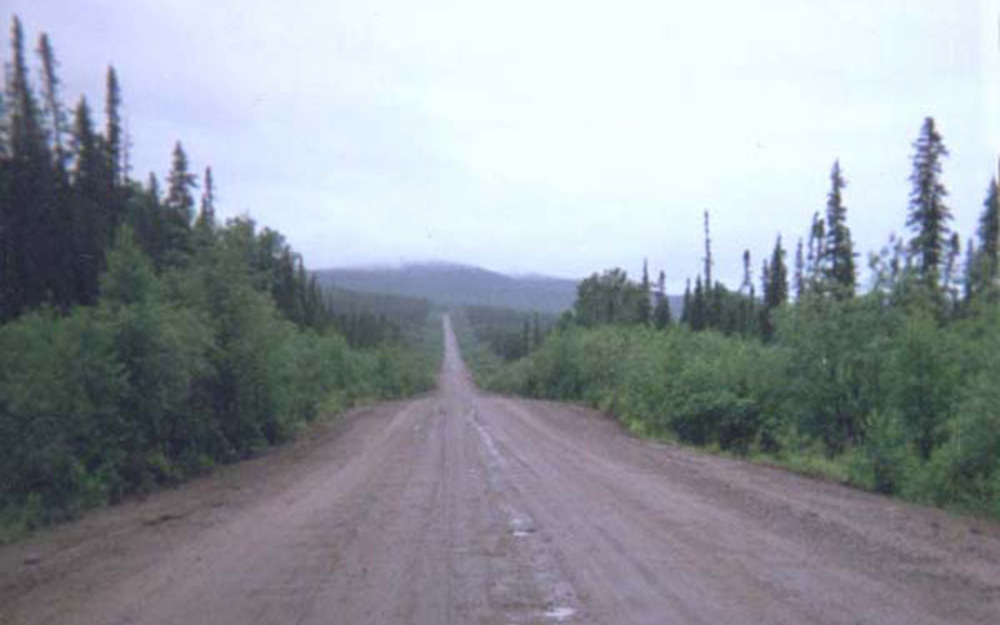 The rain picked up again as soon as I started up the 100 mile dirt road. Although straighter than the paved road south of Manic 5, the packed dirt was thick with washboard and potholes filled with coffee-colored water. I bobbed and wove and slowly picked my way through them, getting wetter and colder as the sky got darker. About 60 miles in I gased up at Relais Gabriel, just a couple buildings huddled in the woods.

I’d hoped to finish the dirt section before I stopped but after four hours I was exhausted and could barely see in front of me; when I saw a bridge I jumped at the chance to throw my bag down under it.

It took an hour more to finish off the dirt the next morning and reach Gagnon. Gagnon used to be a town, but when the mine closed they bulldozed it so now it’s just an empty name marking the beginning of 50 miles of pavement in the middle of nowhere. Then the road turned back to dirt for another 40 miles, snaking back and forth, back and forth over the railroad tracks that appeared out of the woods and were also heading north. I had to stop for a train, a long line of open cars full of black sand going south: iron ore.

The Fermont mine looks like the end of the world, from vast north woods to lunar desert with no transition. Suddenly the trees peeled back and I was riding beside a sea of tan dunes. At first I thought it was just a sandy ridge until I saw a dumptruck the size of a pinhead and realized that my perspective was all screwed up; the horizon tumbled away from me. Further on there was a huge building/machine of belts and concrete silos, then great hills of loose red-black waste earth easily 20 stories high and extending out of sight. Then pavement again.

Labrador City was just a few miles further on but I pulled into the town of Fermont anyway, the first town I’d seen since the St. Lawrence. The heart of the town is a big strange building, a sprawling piece of sheetmetal that’s a combination mall/school/hotel and more. It’s a great idea for the winters to have everything indoors and connected, but stranger still is that the building was designed to act as a giant windbreak for the rest of the town which hunkers down behind it for protection from the northwest wind. I prowled its echoing concrete hallways and thrilled to be in civilisation. It had to be civilisation because it had women, and kids listening to headphones- I’d seen some people in the 350 miles since Baie Comeau but they were all men in trucks or men with equipment. Suddenly here in the woods was a place with a Sears catalogue store, a bank, a hardware store, an ice cream shop, two travel agencies. I ordered some gloriously hot food at a diner and spent 45 minutes smitten with my waitress; unfortunately she was not inclined to speak english.

But once I got back on the highway I saw signs saying that Labrador City had a Tim Horton’s, and that’s another thing entirely.

Everything up here has a purpose. Labrador City is the home of the world’s largest open-pit iron mine, and the neighboring Wabush and Fermont mines aren’t small either, each supporting their own town. Labrador City has 10,000 people and one way or another they’re all there because of the mine. The red hills that rise over the city are not natural, are not hills at all but great mounds of waste — the city is almost in the mine. Churchill Falls, the next town far to the east, is there to service the hydroelectric device. I don’t love mines anymore than I love dams, but in a world built out of metal that runs on electricity this is what’s going on behind the curtain, always. This is where it comes from. It was iron and electrons that got me here.

Labrador City has everything and feels like a normal town with shopping plazas, a movie theatre and a real mall. The people have normal houses, new cars, satellite tv and internet access; I’m told the mine pays well. The kids have skateboards and baggy pants and lurch around in mobs looking sullen. But before 1992 they didn’t even have a road to the outside world; it was then that the miners, while on strike, took the mining equipment and built the last 40 miles of road by themselves. That’s why it’s such a crooked thing, clinging to the established railroad bed — still, it’s a road.

Running east from here, connecting Labrador City to Goose Bay, is the Trans-Labrador Highway. It is 300 miles of loose gravel, and it’s most of the reason I came.