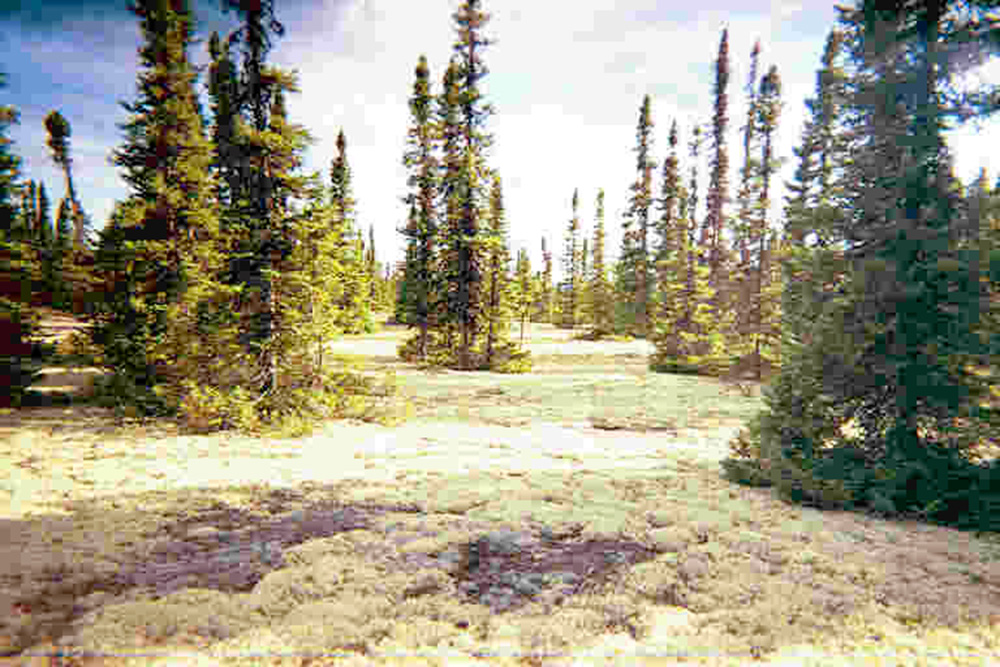 James Bay is the thumb that Hudson Bay sticks down into the continent, and Chisasibi is as far north on the water as the road will take me. It’s plenty far enough.

I’ve never had to sign in to use a road before, especially a road 400 miles long, but I did for this one. Just north of Matagami was a gatehouse where they put my name, address, and telephone number into a computer so they could file a report if I never came back.

At about mile 50 north of the gatehouse I saw a monster of some kind. It appeared to be a very tall dog with the head of a cat, but it was far away and loped into the bushes before I could get a better look. It warms my heart to know that such fine medieval creatures still walk the earth.

It was 240 miles from Matagami to the next gas pump. I emptied my main tank twice, then my reserve, and still had to pour my little cannister of stove fuel into my tank to make it the last couple miles. There’s something unsettling about having to carry my own gas — it reminds me of a movie I saw once that took place in the future when there wasn’t any more gasoline for some reason except there was this guy with a Ferrari — maybe Burt Reynolds? — and he found another guy with a whole bunch of gas hidden away so they decided to drive the Ferrari to California where people still had gas and cars… but I don’t think I saw the rest of it, and I’m not sure I’m remembering this part right anyway. But I remember thinking, Geez, imagine having to bring your own gas with you wherever you went? It seemed so… well, apocalyptic. And then there’s that whole Road Warrior thing.

I spent the night close to the gas pump.

The trees here have heads — dense clusters of needles and cones at the top that bobble and wave in the wind. I feel like a mouse in a wheat field. The effect is even more striking when the trees are dead and there’s nothing left but a slender trunk with a dark snarl at the tip, and there are a lot of dead trees; in some places, mile after mile of them.

Around mile 350 the ground disappeared and was replaced by a dazzling lime-white foam: a vast carpet of bushy lichen about 3 inches thick. The woods were open and easy to walk through but eerie and surreal with such a bright, uniform mat beneath the trees. This alien landscape extended out of sight in all directions, poked through by occasional low bush blueberries and big anthills. Stranger still, the mat was precisely cut by dark lines 20 or 30 feet long — sometimes singly, sometimes forming X’s. The lines were geometrically straight, 3 or 4 inches wide, and through them showed the dark, bare earth. Close inspection revealed rotted wood in the dirt and usually the remains of a stump at one end; these were all that was left of trees that had fallen and decayed right into the ground. They must have been many years dead but the lichen still hadn’t regrown over where the trunks had been; maybe the lichen grows that slowly, or maybe it doesn’t grow on wood. The effect was that of shadows etched on walls by the Bomb, images etched into matter by things no longer there.

The bones of the Shield showed through more the farther north I rode, flat outcroppings of darkened, painstakingly weathered stone. The Canadian Shield is a great big hunk of geology, a massive plate of old hard rock that arcs around Hudson Bay and covers half of Canada, stretching all the way through Labrador in the east. It’s home to some of the world’s most ancient rocks — 3.8 billion years old — which still leaves whole empires and dynasties of previous rocks unaccounted for and probably lost forever. The Shield is so colossal that you can almost see it in a map of Canada, can almost discern its shape, intuit its presence as if it lurked just below the ink. And what is it really? What sort of shield straddles the Earth, cups a giant bay?

Chisasibi is a Cree town and it seems much larger and more interesting than the Hydro town of Radisson. At the moment, though, nobody’s home — they’ve all gone over to Fort George Island, where the town used to be, to celebrate the fact that in 1978 they moved the town to where it is now. I’m not sure what to think, except that they must have really hated living on that island.

James Bay looks like a bastard: brown, churning water and a cold wind. There are a couple dozen very serious looking boats pulled up on the rocky beach, long heavy outboards, Cree boats. This is a working beach. I have trouble getting a sense of where I am; I think I’m missing something.

Where do you go from here — to the north pole, or outer space? At the airport near Radisson I saw a big airplane with Air Inuit painted on the side. Maybe that’s where you go — Nunavut.