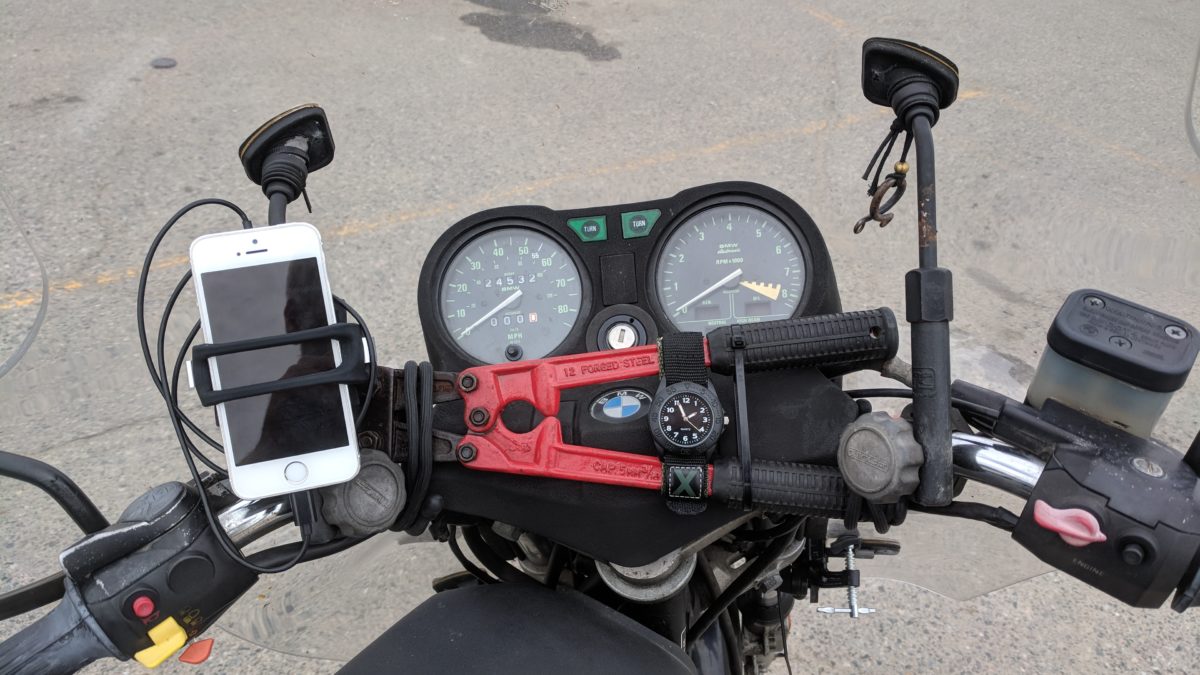 Even with the electrolyte topped up and a fresh charge, the battery only holds out through the morning. I lurch north into Ontario, then stop at the Canadian Tire in Cochrane to look for answers.

They test it again, and again it comes up good. The young guy at the battery desk offers to go ahead and charge it up for me, which would be great except that a few minutes later the battery boils over. He comes out to the parking lot to tell me; he doesn’t know why it did that, and he asked around and no one else knows either. He is self admittedly part of the B-team, since today is Canada Day and most of the North is closed, so his analysis doesn’t run very deep, but neither does mine. A new battery is a reasonable next step in this process of elimination, anyway.

The battery doesn’t quite fit, but it’s close enough. It’s too thick for the tray, which is probably why I have two R65 battery trays at home which have either had the back lip sawed off or smashed flat. But it’s shorter than the original battery, so it perches on top of the tray edge and there’s still room to fit the tool tray in above it.

Two of the four mounting points on the fairing are broken: the top left one is cracked, and the lower right one is completely shattered. The JB Weld I’d applied at home has not held. Two mounting points doesn’t seem like enough.

A zip tie cinches the top one, but the bottom one is trickier. I’ve finally settled on a c-clamp/zip tie combo, and I am hopeful about the results.

My odometer does not work. I have four R65 speedometers at home with broken odometers. A new one costs crazy money, and the used ones are probably broken anyway. For now, my solution is to go digital, an old iPhone running an app called “Speedometer.” It doesn’t need internet because all it uses is GPS, and it gives you speed, distance, altitude and  a few other functions. GPS still drains the phone’s battery pretty quickly, but with a booster battery strapped on it goes all day.

It’s a weirdly simple/complicated fix. How many satellites do I need to invoke to tell this slug the number of inches I’ve crawled across the earth?

I figure out where to put the bolt cutter, and then attach a $10 watch to it so I can finally tell the time.

The troll ward is rusting quickly. I will rub it down with oil eventually, but for now it serves as an additional instrument, measuring my rate of oxidation. 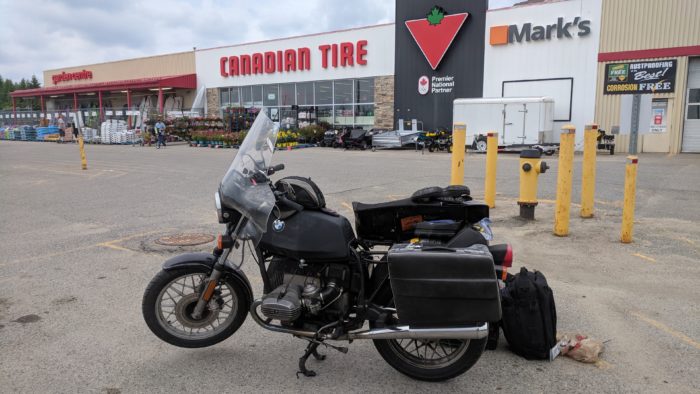